One nice thing about this net is that it goes pretty quickly to leave time for another net (ARPSC) that happens at 8:30 p.m. Lots of brief reports tonight that made you want to learn more.

The beaches are reopening in Hawaii. Bird watching in Ann Arbor is better than usual with blue jays and orioles in evidence. Yesterday was good for mountain bike riding. Local rhubarb is in the market. The Blue Angels did a very brief flyover. The trees are getting green. Getting ready for what will be an unusual Field Day. A power supply needed repair or replacement, but worked OK on low power. New FT8 software has a release candidate, which works great so far.

I joke with my family that this is the "fix your radio hour", and that was in evidence as it is every time - it wouldn't be a proper net without someone overcoming a temporary obstacle.

I listened on my Baofeng UV-5R and then shifted over to the setup I have with a Pi 4 running Ubuntu 20.04 and rtl_tcp, feeding Gqrx on my MacBook Air. The rtl_tcp setup introduces a few seconds of software-defined delay compared to the radio hardware, and it's nice to watch the spectrum go by as you listen.

Thanks to Pat WA4DSR for taking net control.

17 all told, we ran late and overlapped with the N8DUY ARPSC net.

As previously noted the W8UM repeater on 145.23 is off the air because of construction on the University of Michigan central campus at the Weiser Building (aka Dennison Building, aka Physics and Astronomy building). The complete gut and rehab of the space meant that all systems in that building are being torn out and rebuilt, including the space that had been used for the 145.23 W8UM repeater and for the UHF link that connected the repeater to the UMARC shack at the EECS building on North Campus.

Despite the loss of the RF link, the W8UM weekly Sunday night net went on as scheduled tonight, using the Echolink node for net control. I tried to connect but was having a hard time getting audio out of it until I realized that Echolink doesn't play well with firewalls, so I turned up a VPN connection and was able to successfully connect through that.

After the 8:00 p.m. UMARC net there is a 8:30 p.m. ARPSC net on the 145.15 repeater, and several W8UM regulars are also regulars on that emergency and Skywarn preparedness net. So after the net closed we talked for a bit - we being me W8EMV, Augustine W8AWT, Don AC8TO, Matt WS8U, and Thom W8TAM. Several of those folks had attempted to run a net on 145.23 simplex, but the consensus was that we needed a net control station with better coverage, perhaps someone operating from the UMARC shack.

Look for future weeks for more improvised operations. Stuart W8SRC who does a lot of programming of local repeaters was away and not able to provide his assistance, but there were a lot of folks with hardware that could perhaps be put to good use temporarily or permanently.

Operating notes: W8UM repeaters down due to building construction on U of Michigan campus

W8UM Members: all UM repeaters, 2m, 70 cm, & 900 MHz are out of service for the next several months. Building renovations necessitated this shutdown.

No alternative plans for the Sunday Night Net or any other local communication has been determined.

Both the ARROW and Stuart's 70 cm repeaters are optional.

I had a tour of the U of Michigan Amateur Radio Club shack on the UM North Campus in the EECS building, and joined the club this weekend. Dues are $20/yr; it's open to University of Michigan students, staff, faculty and alumni. 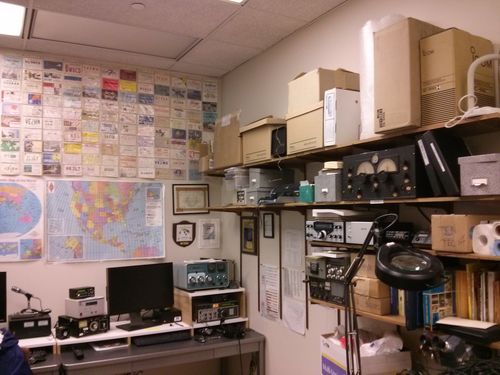 The next step is to get checked out on the equipment so that I can operate everything that I have a license for. The first order of events is to learn how to operate their very nice 2 meter base station, complete with an adjustable antenna. I'm expecting that I'll get better reception and better transmission than with my Baofeng handheld.

The club call sign is W8UM. As of this writing there are about 35 members, and I'd like to see that number increase.