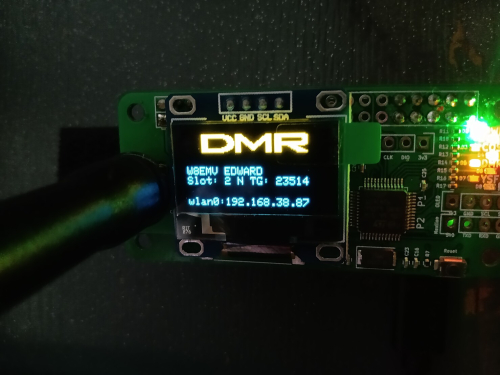 This was unplanned! I happened to have the radio on as M0YNG was tuning up. We had a good 10 minutes chat about radios, tech in general, and how hard it can be to find the instructions to do anything technological because of the vast amounts of jargon in use across the board.

I have a Radioddity / Baofeng RD-5R DMR radio. I got it back in 2018, and have recently added an MMDVM hotspot for it to my collection.

One of the downsides of programming this particular radio is that CHIRP (which is used to program analog radios) is not available for DMR, and that the supported radio software only runs on Windows. And while Windows is fine, the rig I have to run that at home is an ancient Eee PC with a small screen that makes using the programming software awkward at best.

An alternative to the vendor software is dmrconfig, a configuration utility for DMR radios by Serge KK6ABQ. It supports a pretty good set of DMR radios including my RD-5R, and it runs on MacOS and on Linux. It lets you read and write codeplugs to the radio, and it helpfully converts your codeplug to a human readable file so that you can edit it in a text editor.

So far so good with dmrconfig - I've only used it once, but the programming looks like it took just fine. It's certainly a lot more helpful to have a format that can be backed up easily! It does however make me want to get a radio that can have more user entries in the database, the RD-5R is skimpy on that account.

Also noted but not tried yet: qdmr, which uses the same codebase as dmrconfig for radio codeplug writing but that offers a GUI for it. Worth a test another day.

Thanks to @witchy@mastodon.radio for the reference to dmrconfig - they are using an Anytone 878 radio with this particular setup.

New radio! This one is an MMDVM hotspot assembled for and sold by Radioddity. The part I got is clearly labelled "Made in China", but it was shipped promptly from the Radioddity depot in Las Vegas, Nevada. It arrived in a small cardboard box with a single page of tutorial instructions and a few extra screws.

The tutorial text is "Geek Teches THE MMDVM DMR TUTORIAL". I'm certain that it reads better in whatever language it was originally written in, and frankly the text is confusing at best. Fortunately the software and hardware is an ordinary MMDVM and Pi-Star configuration, and there's plenty of good tutorials for that.

Some useful tutorials include:

Nick W8XM was very helpful - I happened to catch him on the ARROW 2m FM repeater while I was putting things together, and I related the problem I had originally where people could hear me but I could not hear their return. It seems that the hardware in this kit is subject to frequency drift, and you need to tune the "RX Offset" with some trial and error (using Parrot) to get an accceptably low BER. At zero offset I had 1.3% error rate; after tuning to -200 my BER was down to 0.2%. Ailunce has a good description of what you need to get to.

I had one glitch on setup - typing in the wrong wifi SSID for our home network! - and had to manually add a new wpa_supplicant.conf file to the SD card to make it work. Fortunately, this tutorial from KE0FHS made that quick work.

The Brandmeister network does not like hear lots of short transmissions in sequence from a single station, so if you are testing things out vigorously and punching a lot of buttons in short sequence you might get a user blocked voice message from the network. This corrected itself for me by waiting an hour.

With all of that set up, I'm back on the air with DMR. There's a weekly Michigan net via Michigan One DMR, and the Brandmeister Feditalk talkgroup is one I hope to make more contacts on.