new radio, who dis? DMR day one on a Baofeng/Radioddity RD-5R

Day one on a new DMR radio.

First impressions: when the sound quality is good, it's just fine. No noise, but you do get dropouts. I'm sure that's the quality of the DMR voice encoder/decoder and not specific to my radio.

I have a Baofeng / Radioddity RD-5R, purchased on sale for less than $60. Build quality is fine out of the box.

Programming the radio was the first task. I had previously obtained a DMR ID from RadioID.net so that step was taken care of. The programming software is from Radioddity and runs on Windows only. Helpfully I acquired a little old laptop running Windows 7 so I was able to run it. The code plug I'm using is from W8XM and is distributed via the ARROW club at the Arrow group on groups.io.

Some mysteries to address while they are still mysterious.

Every so often the radio light turns green, presumably because there's a call on the repeater, but I don't hear anything. I'm told there is a "monitor" mode where you open up the radio to listen to this traffic, but I haven't found it yet.

The code plug is programmed for a "Parrot" server, a sort of echo test that lets you check levels and hear the sound of your own voice.

There should be a way to tune in to an arbitrary channel, and this code plug has a slot for "TS2 Custom" which looks like where I'd do that. I haven't sorted out how yet.

I've had conversations on the W8RP.local channel (to W8XM) and on the statewide Michigan channel (to several folks who were helpful in radio testing). In addition I've listened to the TAC310 group which is a bit random but evidently useful.

The radio also supports analog UHF/VHF repeaters in the area and has a broadcast FM receiver just like the Baofeng UV-5R. So you can listen to your favorite broadcast station and then have the radio cut in with traffic.

A new radio came in the mail today, a Baofeng UV-5RA. This is a cosmetically different but basically identical model to the UV-5R that I already have, which will be a hand-me-down to KE8DDR who I promised a radio once he got his license.

Every new radio gets programmed with Chirp, so every time I have to re-figure out what I already knew about Chirp once and get it working again.

This time it took me three rounds of frustration before finally getting Chirp to work. My first try was with my relatively new Macbook Air; that required downloading a new driver for the programming cable, which successfully loaded but didn't work. Next, I tried an old Macbook, but the battery on that device is so weak that it reboots if you try to do the slightest bit of work on it.

The success came when I rehomed all of the work to a Raspberry Pi. I had to install both the Chirp software as well as X11 and Gnome, and these instructions for loading X11 on Hypriot were essential. Some large number of minutes of downloading new code later, I was ready to test. Still no good. What could possibly be wrong?

Finally I looked closely at the instructions, which say that you should turn the volume knob all the way up before beginning with programming. A twist later and all was well. I loaded in a few Washtenaw County repeater configurations from Repeaterbook, and we're good to go. A brief contact with W8TAM tonight on the W8UM repeater was a first contact.

I know that I'll want to revisit this effort, mostly because it makes sense to grab programming for systems in adjacent counties so that when I'm on the road there's someone possibly to talk to. I didn't add any 70cm repeaters, and I should put in the National Weather Service channels. Still - as a start - this was a relatively easy way to get a new radio working.

I hear a faint rattling sound when I shake the Baofeng CH-5 charger that came with my Baofeng UV-5R radio, and when I place the radio in the cradle I get nothing, no lights, no charge.

Alas my UV-5R is beeping because it needs a battery charge.

I'm guessing it's a solder joint that failed. I opened up the case of the charger and looked, but there was nothing obvious. The only bit that might explain the rattle is a thin piece of plastic that was loose in the case, but not any bits of solder.

Time to take it in to All Hands Active for a build night for a look!

The stock antenna on my Baofeng UV-5R stopped working just before a vacation trip up north. This got in the way of operating in the Upper Peninsula, which I had been looking forward to. Oh well, several the repeaters up there have Echolink, so any time I want to tune in I can, as long as I have wifi or cell data coverage. I didn't go on the air while I was there, though I did monitor one conversation (about snowmobiling).

I've replaced the Baofeng's antenna with a Nagoya NA-771. It's quite a bit longer than the original equipment, so much so that it just barely fits in my bookbag. It still does fit, though, and that means I can still carry a radio around with me anywhere. I haven't done exhaustive trials of performance but it's clearly better that I had been getting before, and overall I'm happy with the switch to a new antenna.

It was a busy night tonight on the N8DUY 145.15 repeater as storms blew through the area causing widespread power outages and lots of talk on the Skywarn net. Even though there was a lot of static, I still was able to hear the talk on the air and relay reports from trained spotters to Twitter. (I'm not a trained spotter yet - yet! - so I didn't check in to the net.)

Keane KD8AOZ organized a class to show good use of 2m radios at All Hands Active on Sunday. Larry KD8MZM and I were there.

First up was programming the Baofeng UV-5R with Chirp. We noticed that the version of Chirp you get when you download the package from apt-get is very old (0.1) so we pulled down a new fresh copy from source from the distribution site, chirp.danplanet.com.

I showed folks how to use the Repeaterbook interface in Chirp to program a bunch of channels quickly, which was much less tedious than hand-coding them into the Baofeng or typing them into tables in Chirp directly. It does mean that Repeaterbook needs to be kept accurate and up to date.

Once we had three working radios we went to the top of the Liberty Square structure to see what we could see. Here I was able to try out a better antenna than the stock one on my radio, and also to get some altitude to help try to reach more distant stations. As it turns out, the top of that structure has a metal covering over the railing structure, which Keane pointed out would be useful to improve reception. I held the rig parallel t the antenna and keyed up the WD8IEL repeater run by the Chelsea Amateur Radio Club, which is about 15 miles away. It came through loud and clear - a much improved result over the normal reception!

All in all a good outing. I am planning to get a better antenna!

I have been having intermittent problems reaching the W8UM repeater, and that's been puzzling. The repeater is located on top of the Dennison building less than a mile from my house, and it's always been easy to hit it. I shrugged it off as a transient problem but it lingered.

The UV-5R has a channel mode, where it can display either a channel name or a channel frequency. I usually set the A channel to be a frequency readout and the B channel to be a name readout. Much to my surprise, when I was working through the frequency side of things, I saw a 136.025 Mhz frequency assigned to the slot where W8UM's 145.230 Mhz should be.

A little bit of Googling later located this helpful page

which goes into detail on a lot of ways that these radios can lose their tiny little minds, and how to fix them by loading a "good fresh initial software image back into memory" using CHIRP.

Haven't gotten to fixing this yet but I thought I should write it down where someone else might find it too.

This list of Echolink commands should be helpful if you want to do more than listen to a repeater. Note that repeater operators can and will change any of these codes.

To switch a Baofeng UV-5R between high power (5 watts) and low power (1 watt), press the octothorpe key ("#") briefly. The "L" character will light on the display if you are operating low power. A long press of the octothorpe key will lock the keyboard or unlock it.

The current version of Chirp is 0.4.0. I updated my radio so now it has channels 1-70 with a bunch of gaps, and added Monroe County, Lucas County (Ohio), and Marquette County repeaters to my setup. Alas, the programming I did managed to get the receive frequencies correct but did not properly get the repeater offsets. I don't know exactly what happened, next time I'll go back and sort it out.

We went to a Mud Hens game (it was a good time, and they won). I wasn't able to find the Lucas County, Ohio Skywarn repeater. We had a little light rain in the first two innings but it cleared up and was a beautiful night.

How did I find this out? I was bicycling across the Diag and tried to tune in WCBN 88.3 FM, and found instead that my radio was just making a high pitched beep and not doing anything when I went to adjust the frequency. It took digging out the manual at home and looking around for a bit to find the magic lock / unlock sequence.

The sign that your keypad is locked is a little lock symbol just to the left of the battery status. This image (via Amazon) shows the screen with all LCD displays on.

Note that turning the radio on and off does not reset the keypad lock! 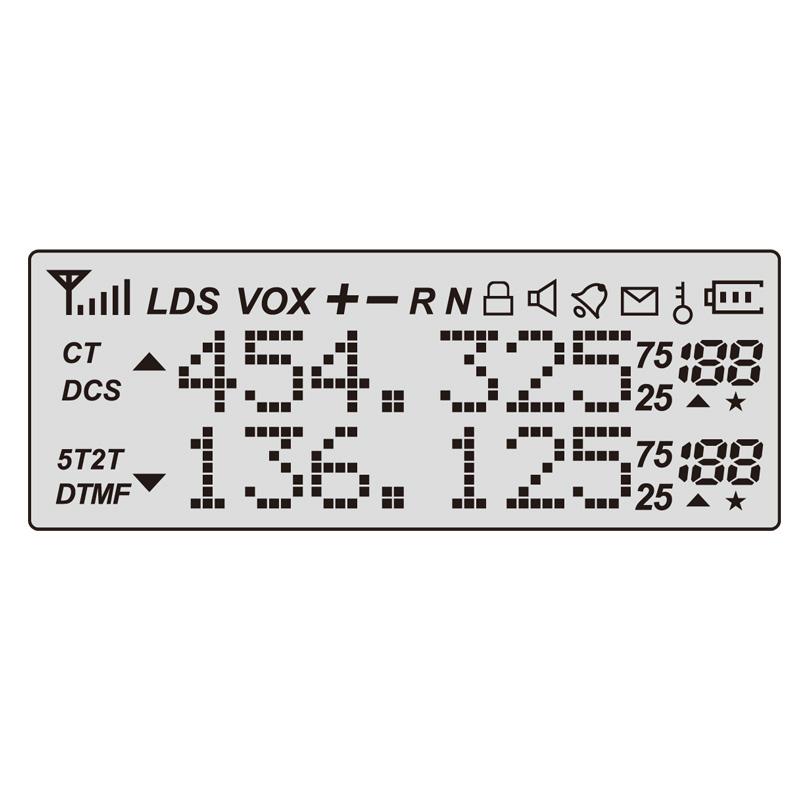